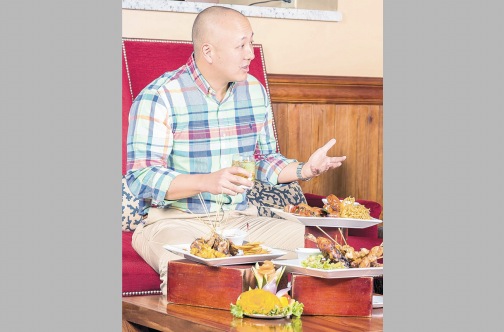 LYN... we’re trying to get people to realise that they have the power to make a difference in their own lives, in their country, and most of all, for other people (Photo: Ryan Mattis)

A new marketing campaign encouraging Jamaicans to embrace their collective power and take more positive actions has been launched by CB Foods.

According to the company, the ‘Live Better’ campaign focuses on improving living standards through conscious decision-making; choosing food options that are better for people’s health; buying homegrown products that support local farmers; and making eco-friendly decisions that do less harm to the country’s beaches and water sources.

“Living better is about change and creating the world you want to live in,” a company news release quotes CB Group’s Chief Operating Officer Matthew Lyn. “We’re trying to get people to realise that they have the power to make a difference in their own lives, in their country and most of all, for other people.”

CB Foods said that over the past two years it has been conducting research and developing a number of new products, brands and services that will be launched in the coming months.

At the core of CB Foods’ new product lines is a US$4-million investment in a state-of-the-art facility that will allow the company to concentrate on two major areas — healthy and convenient foods, and substitution of imported foods.

“Many studies show that the majority of today’s lifestyle diseases — obesity, diabetes, cardiovascular disease, and cancer — are related to diet and environment,” the company noted. “People are working longer hours, cooking at home less, and have developed poor eating habits, which take a toll on personal health, family relationships and even the public health system. Understanding today’s demanding lifestyle, CB Foods is introducing more food options that promote healthier eating habits. To match the consumers on the go lifestyle, the company is introducing foods that require less preparation time without sacrificing any health standards.”

The company said it is continuing its build-out of key agro-industries, thus creating jobs and reducing the need for excessive importation of particular food items, thereby directly contributing to the nation’s growth agenda.

“Investing in Jamaica is in our DNA,” said Lyn. “This is my home. I’m proud and want to make a difference here. That’s why we’re actively seeking to partner with farmers to create jobs and enable sustainable agriculture.”

CB Foods also pointed out that under the Live Better campaign it is promoting a culture of environmental sustainability through its own practices, and by educational programmes targeted primarily at the nation’s youth. The company said it harvests rainwater, uses solar energy at multiple locations, uses biodegradable or recyclable packaging for its products, and has partnered with non-governmental organisation, Plant Jamaica to create green spaces at each of its locations.

“Various herbs, fruits and vegetables will be cultivated and employees will receive training on how to take care of them,” CB Foods added.

“Imagine, before you go home you can quickly pick some fresh rosemary, tomatoes or peppers for tonight’s dinner. Sure, it’s good for dinner, but more importantly, it creates a culture of preservation that each person will hopefully pass on to their families and communities,” said Stephanie Campbell, group manager of people and culture.